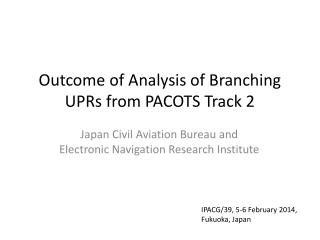 PROCESS OF BRANCHING - . bud initiation. this bud will grow out (bud outgrowth) - depending on developmental and

Outcome 2 - . court processes and procedures, and engaging in justice. key knowledge. the elements of an effective legal

Outcome 2 - . research task: has society changed it’s views and representations over time or do we still

Outcome of the - World café @ itu seventh itu symposium on icts, the environment and climate change 29 may 2012,

Flow Of Control – Branching Statements - . 5-1 if &amp; if-else statements: if statements branch if a boolean check

OUTCOME 2 SAC 2 - . gwen harwood. before you begin!!. understand the topic! read the criteria and notes carefully,

OUTCOME 2 : Community - . add to kwl- what have you learned that you did not know!. outcome 2. community outcome

Learning Outcome 2 - . working practices. learning intentions. by the end of the lesson you should be able to:

Qualitative analysis 2 – analysis of use of language - . structure of this session theoretical origins of discourse