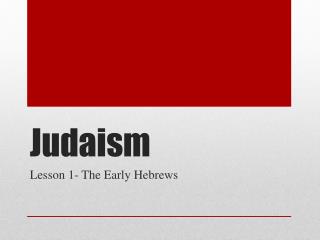 Do Now: - . please take out your world religions chart. then take out an index card. at the top of the lined side, write

Monotheistic Religions - . judaism, christianity and islam. judaism. history. founded by abram in 1800 bce in ur in

Judaism - . 14 million jews worldwide. the people of the covenant. it is not a doctrine, an idea, a faith, but the

Do you take prayer… PERSONALLY? - . sharing our faith with those of other faiths …. other faiths and ideologies to be