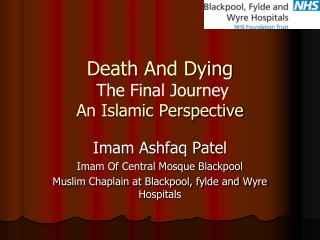 Death And Dying The Final Journey An Islamic Perspective. Imam Ashfaq Patel Imam Of Central Mosque Blackpool Muslim Chaplain at Blackpool, fylde and Wyre Hospitals. EVERY SOUL SHALL HAVE THE TASTE OF DEATH! (Qur’aan 29:57). CHAPTER 17 THE FINAL CHALLENGE: DEATH AND DYING - . learning objectives. how is death defined? why is the definition of

Death and Dying - . death. “the final stage of growth” experienced by everyone and cannot be avoided young- ignore

DEATH AND DYING - Chapter 19. death and dying. learning objectives. dying and death across the lifespan. what is death?.

DEATH AND DYING - . emotional and physiologic elements of death and dying. emotional transitions at life’s end.

DEATH AND DYING - . emotional and physiologic elements of death and dying. terminal illness. a disease that cannot be

Dying and Death - Chapter 23. dying and death. why is there death?. there is no completely satisfying answer to the

Dying And Death - . chapter 20. why is there death?. life span is long enough to allow reproduction and the linage of our

Death and Dying - . chapter 5.3. from “seasons in the sun” by terry jacks. thinking about death goodbye papa, it’s

Death and Dying - . vocabulary. hospice-a facility or program that provides physical, emotional, and spiritual care for

Death and the Dying Process - Types of death basic statistics social aspects of death do not resuscitate euthanasia.