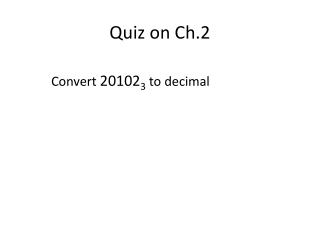 CH 13 Quiz 2 - . the kansas-nebraska act was introduced to settle the slavery issue in the territories strengthen the

Quiz Ch. 1-2: - . when you come in, be seated and have your character sheet from your tfa packet out. put your name and

CH 12 quiz 2 - . john tyler was called “his accidency” because he was never elected president. constantly gave in to

CH 9 Quiz 2 review - . sacajawea was an indian assistant to lewis and clark prophet in the northwest military leader in

Quiz over CH. 8 Sec. 2 - . answer the best option. 1. this machine made it easier to separate the seeds from the cotton.

Quiz Ch. 8 - . what is one main functions of joints? name 2 parts of a synovial joint. from what part of the joint

Ch. 8 Quiz - . why would a big corporation like wal-mart not want to allow workers to unionize?. 1. list the three

Ch. 2 Key Issue #1 QUIZ – Most Missed - . 1. one important feature of the world’s population with the most

Ch 9 reading quiz - &quot;everyone has the ability of making someone happy, some by entering the room, others by

CH 16 Quiz 4 - . what philosophy was used to defend the development of monopolies in industries such as oil and steel?