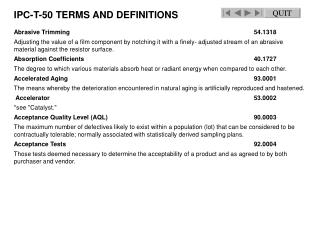 IPC-T-50 TERMS AND DEFINITIONS. Abrasive Trimming 54.1318 Adjusting the value of a film component by notching it with a finely‑ adjusted stream of an abrasive material against the resistor surface. Absorption Coefficients 40.1727 Know Amazing Things About Blister Packaging - When you are looking for any products, the first thing you notice is it's

Some Terms and Definitions - . ecosystems : a grouping of plants, animals, and microbes occupying an explicit unit of

IPC 7.D - . relate the chemical behavior of an element, including bonding, to its placement on the periodic table.

Terms and Definitions - . base metal: metal to be welded fusion welding: process that joins metals by heating them to a

Principe of design definitions - . balance. balance can be achieved symmetrically or Broad and Narrow Definitions of Technology - . evolution of tool use. the “hand axe” longest-used tool of human