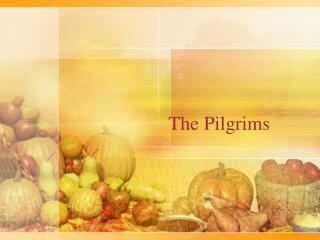 The Pilgrims. Who were the Pilgrims????. Separatists who wanted to officially split from the Church of England. The Pilgrims were treated cruelly by the English government. Fined Jailed Executed. They decided to leave England, and they went to the Netherlands.

Pilgrims and Puritans - . essential questions. who were the early americans and what motivated them to come to the new

Pilgrims - . miss kain third grade. who were the pilgrims?. a group of people who came from england for religious

The Pilgrims and Plymouth Colony - . the pilgrims. a pilgrim is a person who makes a journey for a religious reason. in

PILGRIMS - . pilgrims &amp; puritans. puritan vs. pilgrim – puritan = change from within the church of england

The Pilgrims and the Plymouth colony of 1620 - . pilgrims come to america. in the mid 1600s a religious group called the

Squanto, Friend of the Pilgrims - . vocabulary in context. bay. wh en the large storm was coming, many ships made their

The Amazing Story of the Pilgrims and the first thanksgiving - . a miracle of health on the mayflower. severe illness

The Pilgrims and Plymouth Plantation - . a virtual tour by cheryl romano. who are the pilgrims??. the pilgrims were

In the 1500s, England Joins the Game - . early exploration was done by spain and portugal eventually, england realized

Strangers and Pilgrims - . hebrews 11:13. pilgrim defined and illustrated. one who journeys in alien lands (webster’s).