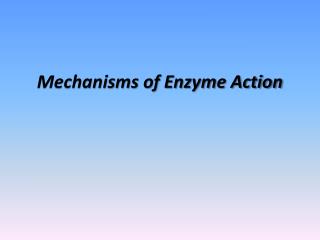 Mechanisms of Enzyme Action. What You Need to Know. Understand the importance of and need for enzymes in biological reactions. Understand how an enzyme’s effect on the transition state and destabilization of the enzyme-substrate complex can affect reaction rates.

Enzyme Immunoassay - . enzyme immunoassay. the eia is a type of nonisotopic immunoassay in which enzymes, coenzymes,

Enzyme kinetics - . why study the rate of enzyme catalyzed reactions?. study of reaction rates is an important tool to

Factors Affecting Enzyme Action - . temperature and ph. enzymes can denature. enzymes are made of complex protein

Action of urease - . objectives to look at the action of an enzyme in different temperatures learn to identify an end

Enzyme Review - . what are enzymes?. enzymes are proteins that speed up chemical reactions. they act as catalysts to

Lecture 5 - Enzymes and regulation. what substrates are available? near equilibrium reactionsmass action ratio is the

Chapter 14 Mechanisms of Enzyme Action - . outline. what are the magnitudes of enzyme-induced rate accelerations ? what

Chapter 13 Enzyme Kinetics - . outline. what characteristic features define enzymes ? can the rate of an enzyme-catalyzed