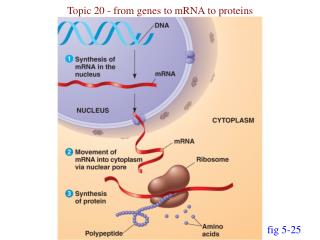 Topic 20 - from genes to mRNA to proteins. fig 5-25. Even before DNA was shown to be the genetic material a human geneticist had hypothesized & demonstrated how the blueprint would be organized. English physician A. Garrod proposed that if: Substrate A Product B Product C Product D FIG.5 - Filling in the gaps: modeling as a spur to research in sunflower a.j. hall, j.e. cantagallo, c.a.chimenti, m.c.