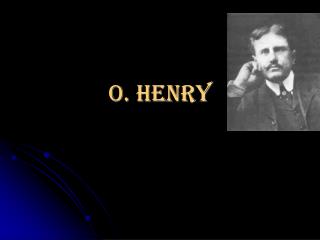 O. Henry. Early Life. O. Henry was born William Sydney Porter, son of a doctor and an artistic mother, on September 11, 1862 in North Carolina. At age fifteen O.Henry ’ s formal schooling ended, and he took an apprenticeship at his uncle ’ s pharmacy. The Writing Begins. O. Henry - . “the gift of the magi” “retrieved reformation”. about the author. o. henry is the pseudonym, or pen

About O .Henry - . about hi m. writer: o.henry o.henry w as a prolific american short-story writer. . about the writer.

Retrieved Reformation by O. Henry - . assiduously. (adv.) in a steady and hard-working way. a guard came to the prison

“The Furnished Room” by O Henry - . creating suspense. what is suspense? how does an author create suspense in a

Ransom of Red Chief by O. Henry - . irony and tone. victims of kidnapping. do you recognize these names? read the

A Gift of Magi by: O. Henry - . summary. this o. henry classic is famous for it’s characteristic, “snapper” or

The Ransom of Red Chief by O. Henry - . review. 1. why do sam and bill need money?. they need the money to pull off a