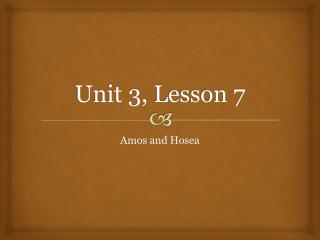 Unit 3, Lesson 7. Amos and Hosea. Amos. Name comes from the Hebrew word amas , which means to lift or carry a burden . So, Amos was the burden bearer. Background Info. Unit 3, Lesson 7: Scale Drawings - . scale drawings are used to represent objects that are either too large or too small

Unit 7, Lesson 3 International organizations - . essential questions: what is the united states’ role in the world?

Unit -3 Lesson - 3 - . a nursing career. learning outcomes:. by the end of the session, trainees will be able to -

The Circulatory System Unit 3, Lesson 7 - . i. purpose of the circulatory system. provides food and oxygen to the cells

The Circulatory System Unit 3, Lesson 7 - I. purpose of the circulatory system. provides food and oxygen to the cells of

7 th form Unit 3 Lesson 6 - . what are the fundraising ideas?. this organisation helps needy children all over the world.

Lesson 7 - 3 - . applications of the normal distribution.

Unit 2 Lesson 7 - . the student will be able to…. discuss population theories related to growth. thomas malthus.

Unit One Lesson 7 - . what basic ideas about government and rights did the state constitutions include. status of