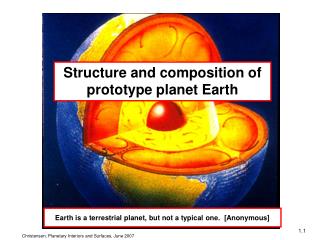 Structure and composition of prototype planet Earth. Earth is a terrestrial planet, but not a typical one. [Anonymous]. Internal structure from seismology. Fundamentals

Planet Jupiter - . fifth planet from sun. largest planet. twice as massive of all the other planets combined. earth

Inside the Earth - . composition (what it is made of). crust (where we live) mantle (hot) outer core (even hotter) inner

Unit 9 Vocabulary Earth Cycles (22 Words) - . axis is: imaginary line that cuts through the center of a planet , such as

Chapter 3 Matter and Minerals - . minerals : building blocks of rocks. by definition a mineral is naturally occurring

The Atmosphere and Air Pollution - . a. origin of modern atmosphere. original atmosphere surrounded the homogenous planet

Minerals - . essential questions: . what are minerals made of? how are minerals formed? how does the elemental