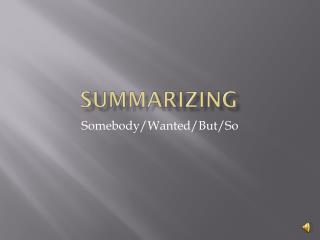 Chapter 5 - . summarizing bivariate data. weight. age. there does not appear to be a relationship between age and weight

Discounted Cashflow Valuation: Equity and Firm Models - . aswath damodaran. summarizing the inputs. in summary, at this

Chapter 1 - . data collection. section 1.1. introduction to the practice of statistics. statistics. the science of

Learning to Love the Research Paper Or … at least learning to do it well! - . mla and apa made easy. table of contents.