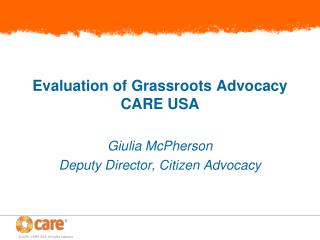 Pediatric Obesity The Epidemic is upon us! - . overview. pediatric obesity – why should you care? simple changes in

Advocate and be the change ! - . introduction to the basics of advocacy. on the menu for the next 30 mins …. making

SLD Re-Evaluation Process - . spring conference 2014. targets. sped re-evaluation: when does it occur and what’s the