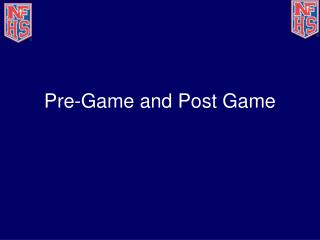 Baseball Pre-Game/Post-Game Conference - . pre-game. your pre-game really begins when you get the

The Pre-Game - . pre-game starts when you receive an assignment. before game day …. all crew members. accept the game

Pre-game Ceremonies - . matt beats his man. this. goes there. he shoots; he scores!. hi aunt sue! i’m smiling in here.

Pre-game Clickers - . did you watch the video? . vertex reflection height axis of symmetry. [default] [mc any] [mc all].

Pre-Game Duties - Home. fj. u. bj. before you start your pre-game duties, huddle on the50 yard line (home side line). sj.

Pre-Game Responsibilities - . 72 hours prior to game u1 &amp; u2 confirm with the r use email (or phone)‏ carpool

Post-Game Duties - . handshake line. r 1. xxxxxxxxxx. officials should stand diagonally across from each other; one on

Post-Game Meetings - . post game. at the end of a game, most officials want to hop in their car and get home, to their

The Pre-Game Conference - . region 2 youth tournament crew in des moines, iowa in 2007. objectives. at the end of this