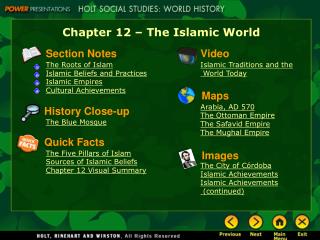 Chapter 11: Islamic Civilization - . a few hundred years after the beginning of christianity, another important religion

The Islamic World - . arabs started on the arabian peninsula tribes leader of each was called the sheikh bedouins were

Chapter 8: The Islamic world Section 1: The rise and spread of Islam - . world history period 6 ritz. a. the arabian

THE ISLAMIC WORLD - . the big questions:. what are the major beliefs of islam? what were the political, economic, and

Unit 3 -Chapter 9: The Islamic World and Africa - . in this chapter you will learn about developments in the middle east

Islamic Art - . islam spread rapidly after its founding, encompassing much of africa, europe, and asia. the art of this

Essential Question: What were the important contributions of Muslim scholars during the Islamic Empire Warm-Up Ques