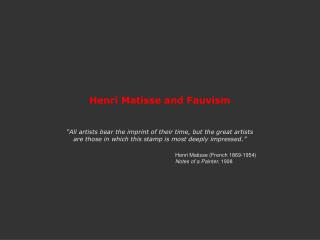 Henri Matisse and Fauvism “All artists bear the imprint of their time, but the great artists are those in which this stamp is most deeply impressed.”. Henri Matisse (French 1869-1954) Notes of a Painter , 1908.

Henri Cartier-Bresson Behind the Gare St Lazare, Paris, 1932 - . what was modern? from about 1915 avant-garde

The Great Race of 1908 - Only nine men had successfully crossed the united states in an automobile at that time.  the