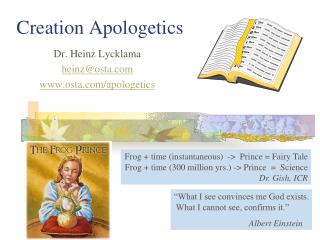 Lesson 5: More Creation Apologetics - . i. the laws of thermodynamics. if the universe has always existed with a

APOLOGETICS - . doubt. certainty. write down three things of which you are certain certainty is the full awareness that

APOLOGETICS - . introduction. the need for apologetics. god told us to do apologetics 1 peter 3:15 (the apologetic

Apologetics - . was jesus mistaken about an early second coming?. did jesus teach he would return soon?. matthew 10:23

Apologetics - . give a defense. what apologetics is not. the art of getting really good at sayin “i’m sorry over and

Apologetics - . session 2 – prophecies israel and other. “but in your hearts set apart christ as lord. always be

APOLOGETICS - . pluralism. what can be known about god through general revelation?. god exists psalm 19:1 the heavens