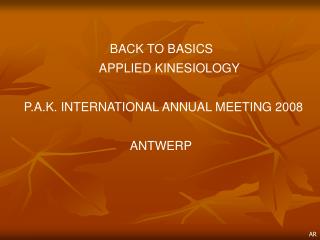 BACK TO BASICS APPLIED KINESIOLOGY BACK TO BASICS APPLIED KINESIOLOGY

Neuromuscular Junction - B. neuromuscular junction. conscious thought (to move a muscle) results in activation of a motor

Youth Development - . an ongoing process through which young people attempt to meet their needs and develop the

CE 203:Structural Mechanics - . lecture # 1 introduction. policy . get to know each other things to know about instructor

Manual Muscle Testing - . an evaluation system for diagnosis of disease or dysfunction of the musculo -skeletal and

Tips To Prevent Back Pain - Https://riversidepainphysicians.com/tips-to-prevent-back-pain/ - get the basics on diagnosis