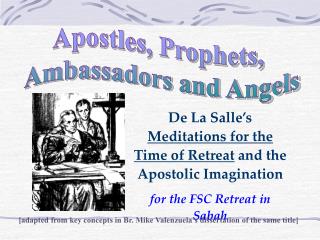 De La Salle’s Meditations for the Time of Retreat and the Apostolic Imagination for the FSC Retreat in Sabah. Apostles, Prophets, Ambassadors and Angels. [adapted from key concepts in Br. Mike Valenzuela’s dissertation of the same title]. Session One Towards an Apostolic Spirituality. CASL AMBASSADORS - Group 1depart raleigh on flights to stockholm. june 26th . group 1arrive stockholm where you will be

The First Presidency and the Twelve Apostles are Prophets - . president thomas s. monson. counselors in the first

Prophets - . learning goal: i will identify the term prophet and how they promote justice. a prophet is a person who

Angels - . game time!. * rules of the game *. give an index card and pencil to each child as they arrive. ask them to

Prophets - . who is a prophet? a prophet is a person who is chosen by allah to give allah’s message to the people why

Prophets - . their relationship to the

Angels and Demons - . the names of angels. mal'ak angelos sons of god holy ones watchers spirits the assembly the