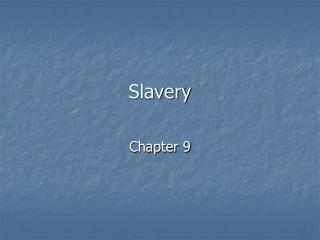 Let ’ s Debate! - . learning how to prepare and do well in a classroom debate. objective. debate an issue for the

Bell Ringer - . what are some differences between north and south in the years before the civil war?. renewing the

Spartacus: Slave Rebellion 73 BC - . who was spartacus?. w as in the roman army . he was sold into slavery and trained at

Questions to write down… - . how did the invention of the cotton gin effect slavery? what was manifest destiny? what

Philemon - . authorship. not in dispute it is one of paul’s undisputed letters. what is in dispute is the apostle’s

Colonial Slavery, the Great Awakening and the Enlightenment APUSH Unit One - . the triangular trade. new england