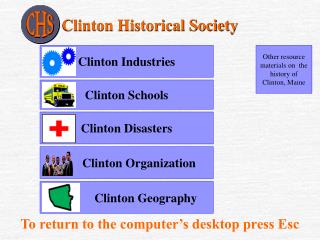 The Impeachment of Clinton - . there are two major steps to removing a president from office first, the house of

A Brief History of Maine Roads

Reporting on the Health of the Gulf of Maine - . christine tilburg, ecosystem indicator partnership, gulf of maine

The impeachment of Bill Clinton - . by, bridget levandowski . information

The journey of Hillary Clinton - , from first lady to first female presidential

The State of Hillary Clinton - Hillary clinton plans to address her use of private email during her time at the u.s.

The Clinton Years - . the main idea bill clinton was a new type of democrat, and his administration faced challenges for

The chalkboard and other display materials