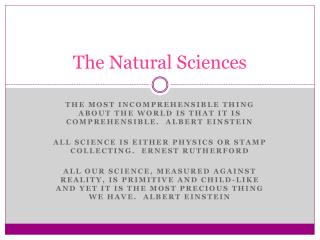 The Natural Sciences. The most incomprehensible thing about the world is that it is comprehensible. Albert Einstein All science is either physics or stamp collecting. Ernest rutherford

Natural Sciences- Scope - . • what is the area of knowledge about? • what practical problems can be solved through

A Review of Canadian Publications and Impact in the Natural Sciences and Engineering, 1996 to 2005 - . ost

Cambridge University and the Natural approach to teaching Science - . john biggins... university of cambridge. who are

The Natural Sciences as AoK - . what is natural science?. “science may be described as the art of systematic