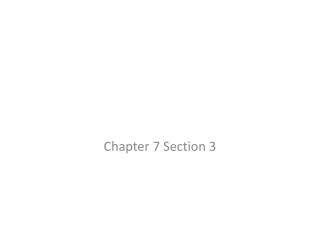 Chapter 7: From Nationalism to sectionalism - . big picture: the war of 1812 filled americans with national pride. yet

Section 3 Debating the Constitution - . section 3 debating the constitution. essential question : how did those in favor

Chapter 7 Section 1 - A time of conflict. chapter 7 section 1. purpose. to identify the causes and events that led to the

Chapter 7 Notes Section 3 Soil Erosion - . use pages to fill in these notes. 1 - soil erosion is important because losing

Chapter 7 Section 3 An era of Nationalism - . nationalism shapes domestic policies. it was a “era of good feelings”

Economics Chapter 7 Section 2 10-10-12 - . monopoly. monopoly—a market in which there is one seller but any number of

section 1, chapter 7 - . the skeletal system. the science of bones is called osteology. functions of bone support