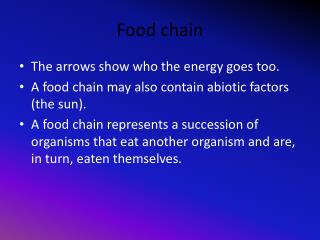 Food chain. The arrows show who the energy goes too. A food chain may also contain abiotic factors (the sun). A food chain represents a succession of organisms that eat another organism and are, in turn, eaten themselves. Trophic level.

Food Chain and Food Webs - . how do organisms interact with one another in a food chain/food web?. in the beginning,

Food Webs, Food Chains and Trophic Levels - . snc1d1 – rhsa. a food chain is one path through a food web . name the

Food chain - . the arrows show who the energy goes too. a food chain may also contain abiotic factors (the sun). a food

Food chains - . a food chain is a sequence which shows how each individual feeds on the organism below it in the chain.

Food Chain &amp; Food Web - . a food chain shows how each living thing gets its food . a food web consists of several

PCD And Food Web and Food Chain - . test review. 1. which organism provides the energy for the mouse in the food web? owl

Food chain / web - . q what is a habitat? a: a habitat is a place where an animal or plant lives. q what is food chain?

Food Chains &amp; Food Webs - . food chain vs. food web- what’s the difference?. a food chain is a diagram that

FOOD CHAIN - . the process of eating and being eaten…. animals. humans. all living things need food!. … and plants.

Food Chain - . by: ashlyn savage. food chain. an ordered arrangement of animals and plants in which each feeds on the one