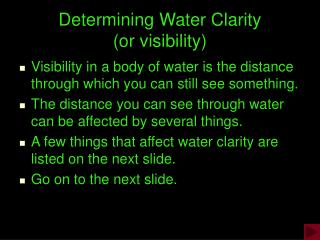 Determining Water Clarity (or visibility). Visibility in a body of water is the distance through which you can still see something. The distance you can see through water can be affected by several things. A few things that affect water clarity are listed on the next slide.

Demand in Business Forecasting - . “ what ’ s missing is often good measurement and a commitment to follow the data.

Atmospheric Chemistry 1 - . objectives of atmospheric chemistry: can we understand how does the atmosphere maintain its

The 15 Points of Size-Up - Excerpts from fireground size-up by: michael a. terpak battalion chief, jersey city, nj. the

Our Goal - . the goal of the islamic computational astronomy network (ican) is to: set up a single, global standard for