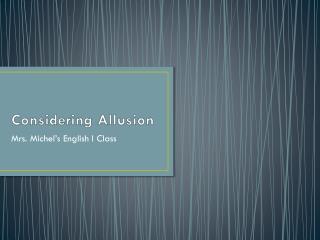 Considering Allusion. Mrs. Michel’s English I Class. What is an ALLUSION?. An ALLUSION is a reference to a statement, a person, a place, or an event from literature, history, religion, mythology, politics, sports, science, or pop culture. An allusion to cartoons?.

allusion - . definition: a reference to something with which the reader is likely familiar, such as a person, place or

Analogy - . definition: a similarity or comparison between two different things or the relationship between them.

Poetry Terms - . all the words you will need to seriously analyze some poetry english 9. the basics – what’s in a

The Poetry of Anne Bradstreet - . about anne bradtreet a softer side of puritans. the first notable american poet this

How to Read Literature Like a Professor By THOMAS C. FOSTER - . and j ungian archetypes. foster: chapter 15 – flights

Antigone Opening Scene - . use with dialectical journal. tips for creating a dialectical

Lyrical - . poetry and music . the world is too much with us. william wordsworth (like blake) was an artist, and along

What is Rhetoric? - . the following quotes have been used to define rhetoric throughout history:. plato: “rhetoric is

What is rhetoric anyways? - . it is using communication effectively for a chosen audience… rhetoric: the art of

Introduction to Poetry - . english 9 ms. marshall 2011-2012. what is poetry?. ”the spontaneous overflow of powerful

Rhetorical Terms - . mrs. gypton. allusion. a brief reference to a person, event, or place, real or fictitious, or to a

The Crucible - . test review. in an allusion to the bible, people “part like the seas” for abigail because they love