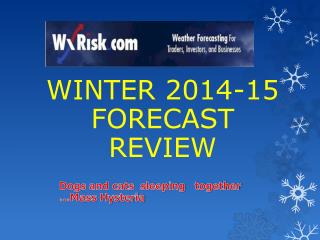 WINTER 2014-15 FORECAST REVIEW. Dogs and cats sleeping together …Mass Hysteria. HYPE… IS GOING TO BE A BIG ISSUE FOR THIS WINTER. **It started back in JULY with a few HYPSTER meteorologists issuing forecasts in JULY !! ** WINTER ROOFING TIPS - No matter what your feelings about the upcoming winter season are, one thing is certain: your

Winter-Quiz- Intermezzo - . on each slide you will find a screenshot from r-studio / or some previous t heoretical

MY WINTER VACATION - . it is always fun to go to the mall to go shopping!. during winter vacation i went to square o ne m

Winter blues - Scenes of winter weather around the