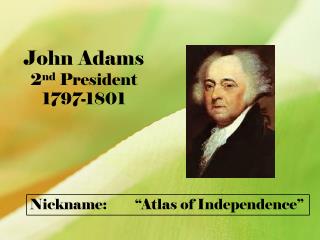 John Adams President - . foreign affairs. election of 1796. problems with france. france had interfered in us policy and

The Presidency of John Adams - . the xyz affair hurts john adams’ presidency. troubles with france. the french are

President John Adams - . personal life. john adams was born in the village of braintree(quincy), massachusetts in 1735.

part of the presidents of the united states of America - . george washington 1st president 1789-1797 federalist. had no

Primary push in New Hampshire - All across new hampshire, crowds are gathering to hear and see the democratic and