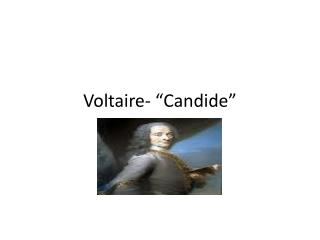 Candide - . by voltaire. chapter 1. how candide was brought up in a fine castle, and how he was expelled from it candide

Communication - . building conversations &amp; community online. making connections. “to succeed in the world it is

Voltaire - . by: jenny and bre. bio. born november 21, 1694 famous for: writings and philosophies crusades against

Voltaire &amp; Candide - . voltaire was born francois marie arouet on november 21, 1694 in paris. he received his

Voltaire - . levi pilcer. “it is better to risk sparing a guilty person than to condemn an innocent one.”. personal

Candide - . question three. question. choose a novel or play or long poem in which a scene or character awakens