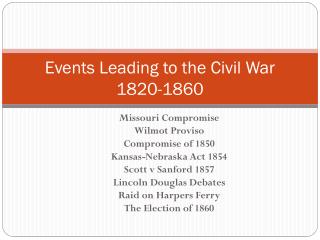 The Missouri Compromise (1820) Addressed two issues: - The road to the civil war building tensions. the missouri

Civil War: Compromise of 1850 - . by caroline dingwall 5 th period ap us history. geographic:. to become a part of the

ROAD TO CIVIL WAR! - . compromise of 1850. should slavery be legal in the mexican cession?. california wants to enter the

SECTIONALISM &amp; THE CAUSES OF THE CIVIL WAR - . the emergence of different societies &amp; economies in the

Missouri Compromise - . the missouri crisis in 1819 missouri applied for statehood; wanted to enter as a slave state the

The Missouri Compromise - . 1820. in february of 1819, james tallmadge proposed to ban all slavery in missouri. the

Election of 1860 - . missouri compromise. compromise of 1850. kansas-nebraska act. “a house divided against itself

The Romantic Period 1820-1860 - . -artwork-. analysis of artwork. romanticism refers to a movement in art, literature,

Road to the Civil War - . steps leading to secession. sectionalism under polk. polk – seen as favoring the south