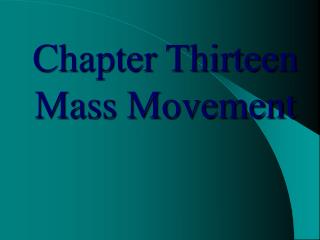 Mass Movement - . section 5.3. mass movements. the transfer of rock and soil downslope due to gravity is called mass

Chapter Thirteen - . conclusion: where we go from here. the benefits of cognitive science. brings together diverse

CHAPTER THIRTEEN - . forces in motion. how can you describe motion?. objects move in many different ways and ad varying

Chapter Thirteen - Media planning. key points: how do you explain the basic concepts used in comparing media? what are