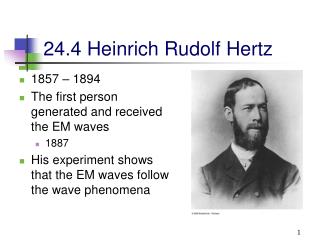 24.4 Heinrich Rudolf Hertz. 1857 – 1894 The first person generated and received the EM waves 1887 His experiment shows that the EM waves follow the wave phenomena. Hertz’s Experiment. An induction coil is connected to a transmitter

Hertz: Chapter 5 - . politics for sale. price of politics. party politics has increasingly become one dimensional – all

Rudolf Husar - Global aerosols: distribution of dust, smoke and haze based on surface and satellite observations or

Experiment 6 - . voltage and current dividers. analysis section. write a matlab program – not excel or your favorite

Franck-Hertz Experiment - . figure 2: simplified plot of electron kinetic energy as a function of position along the

How to set up a CIEF experiment - . this presentation is intended for new capillary electrophoresis users who are part of