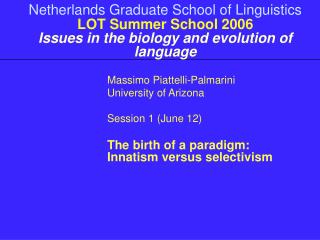 Netherlands Graduate School of Linguistics LOT Summer School 2006 Issues in the biology and evolution of language. Massimo Piattelli-Palmarini University of Arizona Session 1 (June 12) The birth of a paradigm: Innatism versus selectivism. Plan of this course. School of English Literature, Language &amp; Linguistics - . the talk of the toon. dialect words. use the clues to

Summer 2006 Workshop in Biology and Multimedia for High School Teachers - . who wants to be a billion years old?. 1

Purpose of Graduate School - . transformation from a consumer to a consumer/producer consumer – reads other people’s