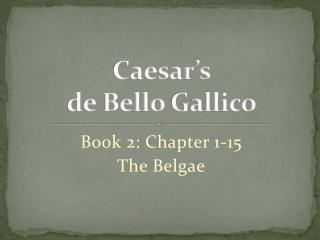 Caesar’s de Bello Gallico. Book 2: Chapter 1-15 The Belgae. The Problem. While Caesar was in winter quarters in Gaul, he was informed by Labienus that all the Belgae were entering into a confederacy against the Roman people The Mathematics of Codes-Day 2 - . michael a. karls ball state university june 22-24, 2005. cryptography throughout