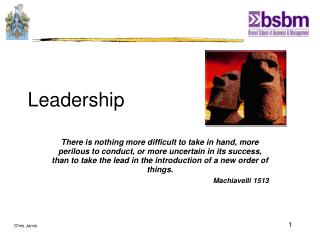 Leadership. There is nothing more difficult to take in hand, more perilous to conduct, or more uncertain in its success, than to take the lead in the introduction of a new order of things. Machiavelli 1513. Leadership. ‘romance’ of leadership debated in organisational theory