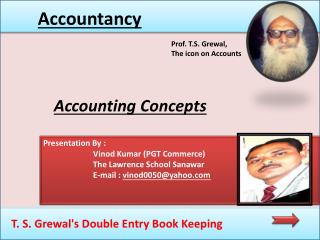 VINOD KUMAR Accounts Teacher The Lawrence School Sanawar. Mr. Vinod is an excellent teacher....the thing which makes him better than any other teacher is that....his utmost faith in hardwork....his dedication towards accountancy.....and indomitable spirit towards providing﻿ quality education to his pupils....he aims to revolutionize the art of teaching.......i feel grateful to have been taught by such a great teacher. Comments By: Hitish Sethia

Learning Objectives - Power notes. introduction to accounting and business. 1. nature of a business 2. the role of

Accounting for Merchandising Businesses - . chapter 6. learning objectives. distinguish between the activities and

Accounting for Leases - . accounting for leases. according to fasb statement no. 13 , a lease is defined as “an