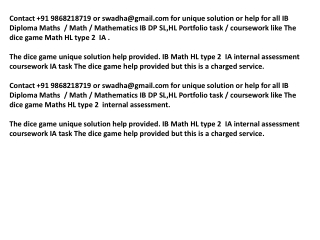 Contact ibmathhelp@gmail.com for IB Math SL HL Portfolio IA task. IB Math HL portfolio Maths IA Like The dice game Portfolio solution is available but this service is charged. The aim of the Dice game IB portfolio task is to create a dice game in a casino and model this using probability. It is important to examine how best to run the game from both the perspective of a player and the casino. In doing so analyse the game to consider the optimal payments by the player and payouts by the casino. Consider a dice game with two players, Ann and Bob. Ann has a red die and Bob a white die. They roll their dice and note the number on the upper face. Ann wins if her score is higher than Bob’s (note that Bob wins if the scores are the same). If both players roll their dice Once each what is the probability that Ann will win the game? Now consider the same game where Ann can roll her die a second time and will note the higher score of the two rolls but Bob rolls only once. In this case what is the probability that Ann will win? Investigate the game when both players can roll their dice twice, and also when both players can roll their dice more than twice, but not necessarily the same number of times. Consider the game in a casino where the player has a red die and the bank has a white die. Find a model for a game so that the casino makes a reasonable profit in the case where the player rolls the red die once and the bank rolls the white die once. (When creating your model you will need to consider how much a player must pay to play a game and how much the bank will pay out if the player wins. Do this from the perspective of both the player and the casino and consider carefully the criteria for whether the game can be considered worthwhile for both the player and the casino.) Now consider other models for the game including cases such as where the player or the bank rolls their dice multiple times, or where multiple players are involved in the game. Online Dice Game - Playing an online dice game is really fun, yet did you know there’s an online casino game that

3x3 matrices IB SL/HL maths - . www.ibmaths.com. 3x3 matrices. by the end of this lesson you will be able to: find the