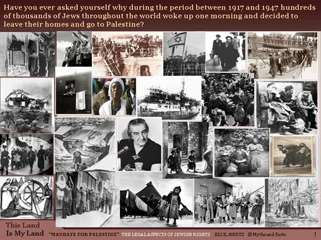 USE OF NEW TECHNOLOGIES IN HEALTHCARE SETTINGS, MANDATE OR AN OPTION - . presented by: dr hatem salem, cphq aseer central

? What is Palestine - Have you ever asked yourself why during the period between 1917 and 1947 hundreds of thousands of

Hi this project is about Palestine and Israel - . by: takyelthalawy , dylan, and oscar hope u enjoy . i don’t look

The Arab-Israeli Conflict - . a look at the region’s history. the arab-israeli dilemma. “israel is a country which