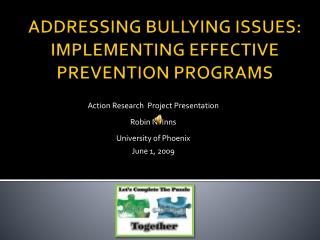 Anti-Bullying Presentation - . september 24 th , 2012. what is a bully? what is bullying?. what does bullying look like?

Bullying - . statistics. there are about 160,000 children that miss school every day out of fear of being bullied cyber

Bullying Statistics - . approximately 30 percent of students are regularly involved in bully, either as bullies or both

A Prayer for Anti-bullying

Physical Bullying - Millions of kids get bullied each year, and you can stop it. physical bullying. characters. narrator:

The Anti-bullying Project - . transforming our educational culture one school at a time!. prevention vs. reaction.

Bullying.. - Bullying. this is a presentation on how bullying affects us around us and how we can act against it… made

Be a Buddy, Not a Bully - . everyone’s part of the solution. anti-bullying specialist melanie siliato. what is

Bullying Presented by: - . felice williams &amp; terri hicks. bullying. a serious problem….!!!! could your child be

BULLYING AND HAZING - . education, intervention, &amp; prevention. esssential questions. what is bullying? what are

Bullying - . fact or myth. nothing can be done at school to reduce bullying. school initiative to prevent and stop

Welcome to the 2013 “Stop Bullying” Presentation - . bullying and teens . how to help your child deal with bullying