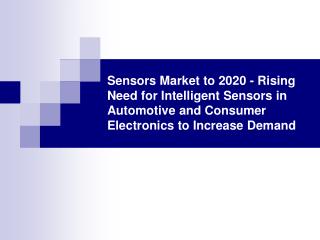 Global Smart Camera Market Anticipated to be worth US$ 382.9 Mn by 2020 - According to future market insights new market

03 - Actuators and Sensors - . the intent of this presentation is to present enough information to provide the reader

Sensors - What are sensors?. robot's window to the world!sensors measure a physical quantity, they do not provide state