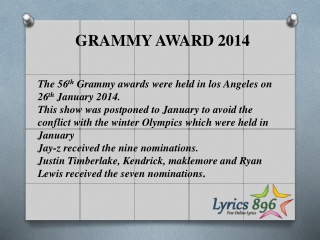 The 56th Annual Grammy Awards were held on January 26, 2014, at the Staples Center in Los Angeles. The show was broadcast on CBS at 8 p.m. ET/PT and was hosted for the third time by LL Cool J. The show was moved to January to avoid competing against the 2014 Winter Olympics in Sochi, as was the case in 2010. Awards Banquet Spring 2014 - . overview. what it is when is it? where is it? uod customs and courtesies? guests and

Taylor Swift - . jamaica paulk. awards: . taylor swift is a seven-time grammy winner, and is the youngest winner in

Awards LPD - . who gets what award?. awards are earned like math (effort + accomplishments divided by position=award) b

B. Karenko, DO January 25, 2014 - . pathophysiology &amp; treatment of chronic venous insufficiency. disclosures. i

Grammy Awards by : Girija Sharma - . how it got started. the grammy award was originally called the gramophone . the