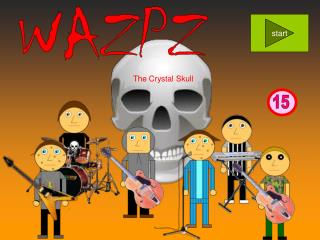 15. WAZPZ. start. The Crystal Skull. Next. Hey, you guys seen my Nintendo DS anywhere?. What’s a DS?. Nope. Next. Have you tried the cellar? Nearly everything ends up in there. I’ll come with, maybe I can find my Rubik cube…Aka, the AllSpark!!!. Next.

WAZPZ - 15. wazpz. start. happy families. next. as usual, it’s my birthday and no one will take any notice because

WAZPZ - 15. wazpz. start. how to loot atlantis. next. just look at you two. you do nothing but sit there and watch the

HAPPY BIRTHDAY - . god’s word through you today has made us. thank you sir for leading us right. roland , angel

Happy Birthday, Dr. King! - . vocabulary. a boycott is the act of voluntarily abstaining from using, buying, or dealing

Sean Seshadri - How to trade volatility? - Dr. sean began his career as a medical physician until a chance conversation

Have a great one! Bruce &amp; Tamara - Chirag, this is not easy for me to say being a big, bad, strong kind of guy,