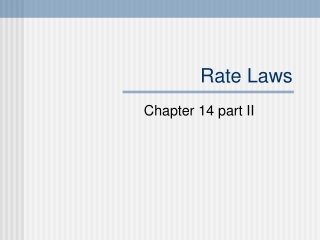 The Laws of Singapore - By: jill jaycox. the laws of singapore. background. annual gdp competes with leading european

The Laws of Singapore - By: jill jaycox. the laws of singapore. background. annual gdp competes with leading european

REVIEW: Rate Laws - . at a certain temperature, the following data were collected for the reaction 2 icl + h 2  i 2 +

Rates and Rate Laws - . reaction rate. the change in concentration of a reactant or product per unit of time. reaction

Integrated Rate Law - . rate laws can be converted into equations that tell us what the concentration of the reactants or

The Origins of Law - . law 12 mr. laberee. why do we have laws?. what would a world with no laws be like? would anarchy

Page 258 - . at higher concentrations, the particles are closer together, and will collide with each other more often.

Chapter 14 Chemical Kinetics - . rate laws. a rate law shows the relationship between the reaction rate and the

Where Does It Say That In the Laws? - . law interpretation. some truisms are not included in the laws. some laws are not