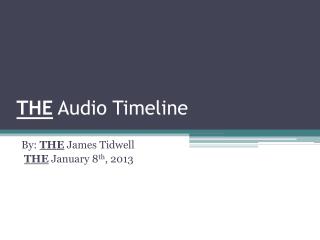 THE Audio Timeline. By: THE James Tidwell THE January 8 th , 2013. 1877. Thomas Edison invents the phonograph when he recovers Mary Little Lamb from a strip of tinfoil wrapped around a spinning cylinder. 1878. Yankee Doodle by Jules Levy is the first music put on record. 1887.

Casual, Social, and Mobile games, and the Audio that makes them Successful - . presented by: nick thomas,

Audio Timeline - . by: camryn valencia. 1887. in 1887, thomas edison was the first person to record someone's voice and

The History of Audio - . by cailey roberson. thomas edison really played a large role throughout the history of audio. he

Audio Timeline - . by: harli kilgore. what is audio ?. audio is an electrical or other representation of sound. audio.

Audio Timeline - By: ashlyn sander. audio timeline. 1857. in 1857 Édouard-léon scott de martinville came up with the

The History of Radio: Timeline - . samuel morse. the first telegraph line is set up between washington, d.c., and

Audio History Timeline - . by: william gray davis. 1876. the first microphone ever made, which was a telephone

Audio Timeline - . by: m adeline p arish. 1877. thomas edison created the phonograph. a band of tin foil was placed on a

Audio &amp; Video Compression and its Application in Consumer Products - . agenda. introduction - the evolution of