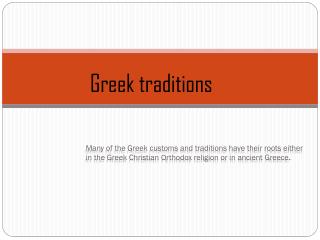 Greek traditions. Many of the Greek customs and traditions have their roots either in the Greek Christian Ο rthodox religion or in ancient Greece. . Name day celebration. Ancient Greek Traditions - . by: kendall, alyssa, alexi, felicia &amp; jasmine. what were the funeral traditions of

Greek traditions 1 &amp; 2 - . an introduction to greek culture and civilization . the geographical position of

Advent Traditions - . wreath calendar jesse tree barbara branches. isaiah 11:1. 1 a shoot will come up from the stump of

Easter traditions - . tradi ţ ii de paste. although like most christian holidays and easter has its origins in fact a

Welsh Traditions - . my heritage by: katy gray. what is this?. this is a figurine made out of coal from wales. the girl