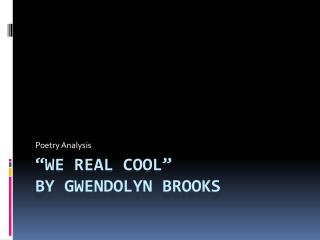 “We Real Cool” By Gwendolyn Brooks Poetry Analysis. “We Real Cool” By Gwendolyn Brooks. Poem:. THE POOL PLAYERS. SEVEN AT THE GOLDEN SHOVEL. We real cool. We Left school. We Lurk late. We Strike straight. We Sing sin. We Thin gin. We Jazz June. We Die soon. [1960] Audio. Background of the author.

“We Real Cool” By Gwendolyn Brooks

Interacting With Dynamic Real Objects in a Virtual Environment - . benjamin lok february 14 th , 2003. why we need

Temperatures - . prepared by claudia doria and terra myers. this is sandy. sandy feels cool. how does sandy feel?. she

As of March, 2014 Mini-Brooks Qualifications Based Selection (including Design/Build) - . david s. tuttle, board counsel

LiveNote TM - . note: use page-down key or left click to advance presentation. use page-up key or right mouse click to

Imagine you are writing a story, and you have all this cool information, but you just can’t figure out how to get - D.