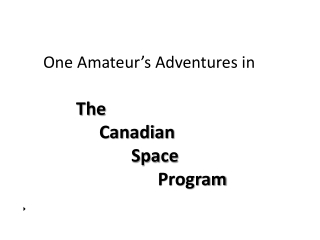 The Amateur’s Code The Radio Amateur is: - . considerate ... never knowingly operates in such a way as to lessen the

Amateur Radio, Your PC and the Internet - . presented by tony langdon, vk3jed for the melbourne pc users group, dec 5

Voyager Travel Adventures - . everywhere you want to go. what we offer. voyager travel adventures offers a variety of

The Space Program - Lesson 2, chapter 2 exploring space . the space program. the race for space. the space race began in

The Never Ending Adventures of Space - . by : drew smith. the solar system. our solar system is made up of 8 planets.

Radio Merit Badge Boy Scouts of America - . module 3 – amateur radio 2009. key topics in this module. why does the fcc

Adventures Ahead Internship Manual How to teach kindergarten at an after school program - . jessica “keo” booker ~

Technician License Class - . chapter 1 welcome to amateur radio. what is amateur radio?. amateur (or ham) radio is a