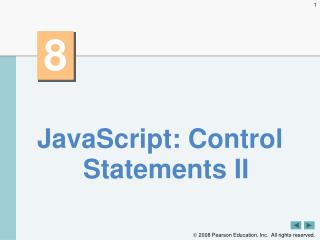 8. JavaScript: Control Statements II. Not everything that can be counted counts, and not every thing that counts can be counted. —Albert Einstein Who can control his fate? —William Shakespeare The used key is always bright. —Benjamin Franklin Perl/CGI - . what we have learned and will learn. html/xhtml: contents css: display, layout javascript: client side

JavaScript Programming an Introduction Prepared By P .D. Krolak and M.S. Krolak - . based on material from javascript

JavaScript: Control Statements II - 8. javascript: control statements ii . not everything that can be counted counts, and