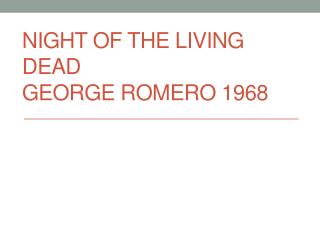 Night of the Living Dead George Romero 1968. Meaning. Text: the meaning created by either written word, images or moving images Does the Canon matter? “What was the film about?” “ What does the film say?” Does the author ultimately matter? The original intent?. Latent Image. The Living Dead - . egyptian gods, mummification, and the afterlife. introduction. to the egyptians, religion and

Night of the living cows - . moo! moo! cow is dead ouch! ouch! they chopped off his head not white now it’s red thomas

Story Problems and the living dead Active Learning - . who doesn’t like a good story problem now and

1968-The Eve of Destruction? - . the tet offensive-vietnam american attitudes on the war eugene mccarthy- come clean for

Day Of The Dead - . 500 years ago, when the spanish conquistadors landed in the place that is now called mexico, they