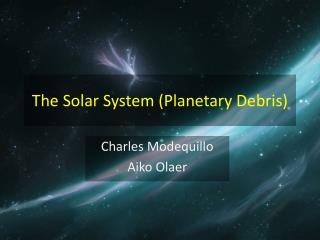 Solar System Debris - . asteroids. asteroids are relatively small. most have eccentric orbits in the asteroid belt

Debris Disks and the Formation and Evolution of Planetary Systems… - . christine chen october 14, 2010. dust debris in

Solar System Overview - . created by the lunar and planetary institute for educational use only lpi is not responsible

The Solar System - . a review . measuring distance in space. what does the astronomical unit (au) measure? the

THE SOLAR SYSTEM - . made by a group of students from publiczne gimnazjum in przytyk. general information. the solar

The Solar System - . our planetary system: part a. inventory of the solar system. our system 1 star 8 planets 5 known